The United States is a federal country made up of 50 states that span the middle of North America. The United States landmass is bounded to the east by the Atlantic Ocean and to the west by the Pacific Ocean. The country has a border with Canada in the north and a 3,155-kilometer border with Mexico in the south. The Bahamas, Cuba, and Russia all have marine boundaries with the United States (in Alaska).

in this article you will get to know about the USA map, the oldest American state, the city name found in all 50 states, the list of states in the USA, and a whole lot more.

Actually a federal state with 50 states, the United States of America is located in North America. The majority of the continent lies between the Pacific Ocean in the west and the Atlantic Ocean in the east. The US map displays all 50 states, their capital cities, territorial boundaries, state borders, and international borders shared by the US with Canada and Mexico. The Atlantic, Pacific, and Arctic oceans all touch the United States’ coastline, which extends to the northern boundary of Alaska.

Map of the Contiguous United States 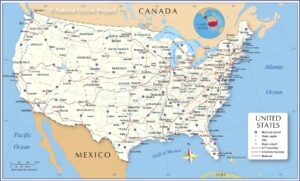 A basic map of the USA that simply includes the names of the states is known as the United States Map with State Names. You can immediately find the state you’re seeking for thanks to the clear and simple to understand writing. Additionally, it lists the names of Canada’s bordering provinces, as well as those of Mexico, The Bahamas, and Russia.

Which American state is the oldest?

ME, AUGUSTA – According to the U.S. Census Bureau, Maine is still the oldest state in the union, closely followed by New Hampshire and Vermont. According to the American Community Survey, the median age in Maine in 2017 was 44.6, not changing from the previous year.

The United States is made up of 50 states plus Washington, D.C., sometimes known as the District of Columbia, which is a federal district.

What city name may be found in all 50 states?

Although it is a common misconception that “Springfield” is the only community name to exist in all 50 states, as of the most recent count, it was only present in 34 states.

When the Lee Resolution was created following the American Revolutionary War, there were 13 states in the United States of America. The thirteen states were declared free and independent of the British colony by the Lee Resolution. From that point forward, the US steadily expanded and eventually joined the ranks of the world’s superpowers. The majority of people who exist on this planet hope to at least temporarily reside in the United States of America.

According to the Census Bureau, the United States has four major regions and nine divisions.

The following is a list of the states in the USA:

We trust that you have found this article helpful. Do well to share with friends and bookmark us to get notified for Latest updates.