Would you like to know what makes Oregon prominent and well-known? Do you wish to discover the population of Oregon’s largest cities? Do you want to know the minimum wage in Oregon or if it’s a pleasant area to live? If so, stop searching because this article is what you need. 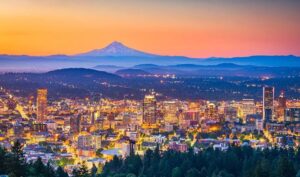 What is Oregon Recognized and famous for?

The 33rd biggest state by area in the United States is Oregon. It is referred to as the “beaver state” and is a well-liked vacation spot for both domestic and foreign visitors. So what makes Oregon so well-known?

Oregon is well known for its rugged coastline, gorgeous woods, distinctive animals, and laid-back lifestyle. The well-known Oregon Trail and other natural wonders like Multnomah Falls, the Willamette Valley, and Hells Canyon are among the top attractions for tourists that come to the state.

Because of its enormous beaver population, history of the beaver fur trade, and significance of beavers in the state’s monuments, Oregon is known as “The Beaver State.” Because of the zenith of the beaver trapping industry in the 1800s, the renowned Oregon Trail was created.

With a population of 666,249, Portland is the biggest city in Oregon. With an increase of 18.99% since 2010, Tetherow has seen the greatest growth in Oregon during the past ten years.

In Oregon, only cities have been incorporated. In Clackamas County, there are villages and hamlets, which have little authority and no charters granting them home rule. There are 241 cities in the state, with Greenhorn having the smallest population with only two people. Lonerock, Granite, Shaniko, and Antelope are just a few of the numerous cities in the state with populations under 100.

Is Oregon a nice place to live?

What is Oregon’s minimum wage?

It’s difficult to select the greatest areas to live in Oregon by reducing your options. Fortunately, every city has its own character and allure, from old downtowns to oddball shops and cultures.

The best places in Oregon have a few characteristics in common. The vistas are breathtaking, there are several microbreweries, and the outdoors is a delight. Everybody may find something to enjoy in Oregon, from historic communities to major urban districts.

Is Oregon or California a better place to live?

Oregon costs 19.3% less than California. Everything will cost higher in California, including housing, rent, groceries, and monthly costs. In California, housing expenses are up 39.5%, transportation costs are up 11.5%, and monthly grocery expenditures are probably going to go up 11.8%. Residents of Oregon will spend 37.5% less on daycare.

The comprehensive map displays the limits of the state of Oregon, the position of Salem, the state capital, major cities and other inhabited areas, rivers and lakes, interstate highways, major highways, railroads, and important airports. 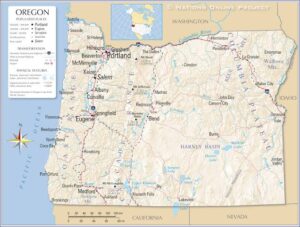 Is it costly to live in Oregon?

One of the most costly states to live in is Oregon. In fact, with a cost of living of 31.43% more than the national average as of July 2021, Oregon was classified as the fifth most expensive state to live in.

Does snow fall in Oregon?

How is the weather in Oregon?

In Oregon, the seasons are lengthy, hot, and rainy in the summer; cold, snowy, and windy in the winter; and partly overcast all year. The average annual temperature is between 13°F and 82°F; it is seldom below -7°F or over 90°F.

Is Oregon a decent area for families to live in?

The Oregon state capital most surely deserves on the list of great places for families in Oregon. It’s situated in the heart of the Willamette Valley on the river, surrounded by mountains and vineyards, and it’s still a reasonably priced area to buy a property in a smaller city with big city services.