Ottawa in Canada! Residents of Ottawa adore it. It is a top city to think about if you are relocating to Canada. Ottawa, Ontario, the capital city of the country, offers a wide range of professional opportunities to support your financial success once you get there.

The capital of Canada is located in Ottawa, which is east of southern Ontario and close to Montréal and the American border. On the banks of the Ottawa River, it is dominated by Parliament Hill, which features impressive Victorian architecture, and institutions like the National Gallery of Canada, which is known for its holdings of Canadian art, including indigenous art. In the summer, boats line the park-lined Rideau Canal, and in the winter, ice skaters use it. 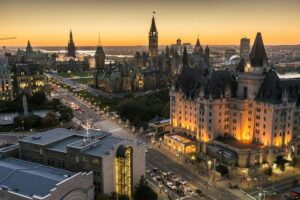 Is Canada’s Ottawa a desirable place to live?

The best location to live in Canada and one of the top 100 cities in the world, according to surveys, is Ottawa. It’s an excellent city for newcomers because of its diversity, robust economy, schools, and Canadian history. It is also rated as the top location for newcomers to Canada to live.

Is Ottawa a Good Place for Immigrants?

Definitely. Ottawa is a fantastic place for newcomers to live. The city is clean, welcoming, and diversified in terms of culture. It boasts a decent public transportation system, is great for pedestrians, and has a variety of housing alternatives. The city is home to the Federal Government and has a world-class school system. Perhaps most importantly for newbies, it provides a variety of professional options.

Why is Ottawa Canada’s capital?

In 1857, Queen Victoria chose Ottawa as Canada’s capital because it was a fortified location on the border between Quebec and Ontario, the two provinces that comprised the country at the time. Parliament Hill, the meeting venue of Canada’s House of Commons and Senate, is located in the city.

The job growth in Ottawa has typically outpaced that in other Ontario cities. According to the Ottawa Real Estate Board, the unemployment rate was 4.6% as of November 2021. This is considerably less than the 6.7% national average.

The top industries in the city are still those that are expanding the fastest. The following sectors in the area are hiring:

Ottawa is home to a wide variety of cultural attractions, such as festivals, galleries, and museums. Additionally, Ottawa is home to a large number of recreation facilities, such as multipurpose buildings, senior centers, parks, tennis courts, basketball courts, arenas, and outdoor rinks.

Skating on the Rideau Canal is one of the best winter sports in Ottawa. You can borrow skates and skate on the world’s longest outdoor rink! And the first three weeks of February each year see the grand Canadian winter event known as Winterlude.

The current population of Ottawa 2022

The Local Economy of Ottawa

Compared to other Canadian cities, Ottawa has the highest concentration of PhDs, engineers, and scientists per capita. Due to a rising public sector and high-tech industries, it also boasts Canada’s highest. It is consistently lower than the national average and the unemployment rate is constant.

The city of Ottawa has a robust economy and provides a wide range of employment options for persons from all backgrounds and interests.

The major sectors in Ottawa are:

Call 9-1-1 in case of emergency. Wherever you live in Canada, this number is the same. There are four hospitals in the area: Children’s Hospital of Eastern Ontario, Montfort Hospital, The Ottawa Hospital, and Queensway Carleton Hospital. Additionally, the area is home to a number of specialty hospitals and clinics.

Ontario Health Insurance Plan, the provincial public health program, is available to residents of Ottawa (OHIP). It provides coverage for a variety of medical services, including as check-ups with your primary care physician or at walk-in clinics, hospital stays, eye exams, and vaccinations. Prescription drug costs, however, are not covered by OHIP.

Major healthcare and technology companies are based in Ottawa. The largest employer in the area is the federal government. Some of the top companies in Ottawa include:

Is Ottawa an Expensive Place to Live?

Living in Ottawa may be pricey. Although housing costs are a little lower than average, rent is more than in most cities. Food, entertainment, and transportation costs may be higher than they would be if you resided in a smaller city. But it evens out when you take into account the job possibilities and career options in the area.

Here are some quick facts about Ottawa:

Your future in Canada will be significantly impacted by where you choose to live. You must carefully consider and research what the city has to offer. It’s crucial to consider how the housing market and your professional choices will impact your family and way of life in the future. One of the reasons new immigrants choose Ottawa as their chosen destination is because it is a sizable and diversified city in Canada.

Do you find the information in this article useful to you? Please leave any comments in the section below, and please share with your friends.