Manitoba Canada! Canada’s province of Manitoba is located in the country’s longitudinal center. With a population of 1,342,153 as of 2021, it is Canada’s fifth-most populous province. It has a very diverse landscape, ranging from arctic tundra and the Hudson Bay coastline in the north to dense boreal forest, big freshwater lakes, and prairie grassland in the center and south.

Are you considering relocating to Manitoba, Canada, to live and work? You made a wise decision there. Manitoba is a stunning province with a vibrant past and present. It’s in the center of Canada and is renowned for its stunning landscapes, which include forests, lakes, and grasslands. The province is also home to a variety of fascinating towns and cities, including Winnipeg, the provincial capital.

There are numerous services available to aid with your adjustment if you are a new resident of Manitoba. This post will cover a wide range of topics, including the economy of Manitoba, Canada, how to find career opportunities there, Manitoba’s cost of living, its major cities, and much more. 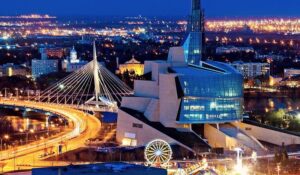 The economy of Manitoba, Canada

The Canadian province of Manitoba has a broad economy that is made up of businesses in the agriculture, manufacturing, forestry, mining, and tourist sectors. Manitoba has a significant livestock industry and is a major producer of crops, such as wheat and canola. Another significant contribution to the economy is the manufacturing sector, which produces everything from consumer items to car components. The timber sector contributes significantly, and Manitoba is home to numerous sawmills and paper mills.

The production of minerals including nickel, zinc, and copper is at the heart of Manitoba’s mining sector. Lastly, tourism is a significant component of the economy, with many people traveling to Manitoba to enjoy the natural beauty and outdoor leisure options.

How to locate employment possibilities in Canada’s Manitoba.

In Manitoba, Canada, there are numerous ways to locate employment possibilities. Here are some recommendations:

The Canadian government runs a job bank that features a list of positions available in Manitoba and elsewhere in the nation. Jobs can be found using the location, industry, and job title filters.

In Manitoba, there are numerous employment agencies that can support your search for employment. These organizations can you in your job search by connecting you with employers who value your talents and expertise.

In Manitoba, many employers attend these gatherings where job searchers can network with potential employers and learn about available positions. Local newspapers, job search websites, and your neighborhood employment center are all good sources of information on upcoming job fairs in your area.

Networking can be a very effective technique in your job hunt. Attend trade shows and meetings in your field, and establish relationships with those who might be able to assist you in finding employment.

Many websites post job openings in Manitoba and across Canada on online job boards. The most well-known job boards are Jobminda, Monster, Indeed, and LinkedIn.

What are the living expenses in Canada’s Manitoba?

The price of food in Manitoba is comparable to the national average. In Manitoba, a supper at a midrange restaurant may run you about $20 CAD, while a week’s worth of groceries might run you about $100 CAD.

The majority of medical treatments are covered by the publicly funded healthcare system in Manitoba, so citizens don’t have to pay out of pocket for them. However, some services, like those for prescription medications and dental work, could not be completely covered and necessitate payment.

Depending on your interests and the kinds of activities you like, the cost of entertainment in Manitoba might vary greatly. Monthly gym membership in Manitoba can cost as much as $50 CAD, while movie tickets average around $12 CAD.

In general, Manitoba has a cheaper cost of living than other large Canadian cities like Toronto and Vancouver.

Reasons to Travel to Manitoba

You should consider visiting Manitoba, Canada, for a variety of reasons. To name a few:

There are many different types of natural landscapes in Manitoba, including woods, lakes, and rivers. Riding Mountain National Park and Whiteshell Provincial Park, are two national and provincial parks in the province that provide chances for hiking, camping, and other outdoor activities.

There are numerous museums and cultural institutions to visit in Manitoba, which has a rich history and culture. Both the Canadian Museum for Human Rights and the Manitoba Museum are well-liked tourist destinations in Winnipeg.

Winnipeg, the capital of Manitoba, is renowned for having a thriving arts and culture scene. Numerous theaters, art galleries, and music venues can be found in the city, and there are numerous events held there all year long.

Polar bears, moose, and bison are among the many species of animals that can be found in Manitoba. There are a number of popular birdwatching spots in the province as well.

Travelers can afford to visit Manitoba because the cost of living there is typically lower than in other significant Canadian cities.

The people of Manitoba are renowned for being kind and inviting and for being eager to share their knowledge and culture with guests.

With numerous airports serving the province, Manitoba is easily reachable by air, road, and rail.

In Manitoba, Canada, there are a few major cities:

With a population of around 778,000, Winnipeg is both the provincial capital and largest city in Manitoba. Winnipeg, which is located in the province’s south-central region, is renowned for its arts and culture scene, featuring a variety of theaters, galleries, and museums. The Winnipeg Folk Festival and the Winnipeg Fringe Festival are just two of the many festivals that take place in the city every year.

The population of Brandon, the second-largest city in Manitoba, is roughly 53,000. Brandon, which is in the southwest of the province, is well-known for its parks and recreational activities, as well as for its forestry and agriculture sectors.

In north-central Manitoba, the City of Thompson has a population of roughly 13,000 people. Thompson, which is in the province’s mining and forestry sector, is well-known for its options for outdoor activities like hiking, fishing, and hunting.

With around 13,000 residents, Portage la Prairie is a city in south-central Manitoba. The agricultural and transportation sectors, as well as the city’s historic downtown, are what make Portage la Prairie, which is situated on the Assiniboine River, so well-known.

With around 16,000 inhabitants, Steinbach is a city in southeast Manitoba. Steinbach, which is situated in the agricultural heartland of the province, is well-known for both its Mennonite background and its yearly summer event, Steinbach Summer in the City.

How far is it by rail from Manitoba to Ontario?

928 kilometers separate Ontario from Manitoba. The length of the road is 2222.4 kilometers. Without a car, how can I go from Ontario to Manitoba? Without a car, the best method to travel between Ontario and Manitoba is by rail, which takes 34h 35m and costs $290 to $850.

What language is used in Canada’s Manitoba province?

The vast majority of people in Manitoba utilize English in daily life. Another important language is French because Manitoba has one of the largest concentrations of francophones outside of Quebec. In some communities, French is frequently the preferred language.

What is Manitoba known for in Canada?

Manitoba, a province in central Canada, is well recognized as the world’s polar bear capital. However, there are other more alluring attractions in the area, like its numerous stunning lakes, its top-notch museums, and its distinctive festivals.

This is a small selection of Manitoba’s cities; it does not include every single municipality. In addition to the cities mentioned above, Manitoba also features a number of smaller towns and villages.

The following is a list of cities in Manitoba, Canada:

Has the info provided in this article about Manitoba Canada been helpful to you? Don’t forget to share with your friends.