Florida is one of the 50 states that make up the USA. In 1845, it became the 27th state to be admitted. The most populous state in the Southeast is Florida, which is also the second-most populated state in the South after Texas. Tallahassee, the state’s capital, is situated on the northwest Panhandle.

Most people associate Florida with alligators, theme parks, and beaches. But this southeasterly state is so much more than that! Florida has plenty to offer everyone, from the energetic hub of Miami to the sleepy communities on the Panhandle. It is a great place to live and work.

Here you will get to know Florida’s largest cities and their population, the number of cities and towns in Florida, the best places to live in Florida, what Florida USA is famous for, and much more in this post. 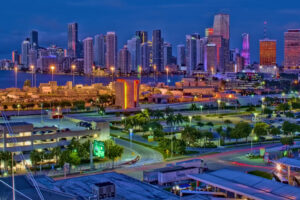 Where exactly is Florida?

The state of Florida is situated in the southeast part of the country. In terms of population and area, Florida ranks third out of the 50 states. The Gulf of Mexico, Alabama, Georgia, and the Atlantic Ocean are from the state’s western, northern, and eastern borders, respectively.

How many cities and towns are there in Florida?

What is Florida USA famous for?

Florida is famous across the globe for its beach resorts, amusement parks, warm and sunny environment, and nautical activities; sites such as Walt Disney World, the Kennedy Space Center, and Miami Beach attract tens of millions of people each year.

Is Florida the same as Miami?

Miami, also known as the City of Miami, is a coastal city and the county headquarters of Miami-Dade in South Florida. It is the second-most populated city in Florida and the eleventh-most populous city in the Southeastern United States, according to the 2020 census, which had 442,241 residents.

Why is Miami well-known?

Miami is renowned for its immaculate beaches, never-ending nightlife, and wonderful warm weather. Miami is also renowned for its breathtaking skyline, opulent stores, Art Deco buildings, and upscale hotels. However, did you realize that Hispanics make up about 70% of the population?

The Education System in Florida

Florida supports the public school system so that no kid is denied access to a minimal level of education, with the counties being obliged to go above and beyond this requirement. A state-supported institution or university that is a member of Florida’s broad higher education system is commutable for nearly the whole state’s population.

The first two years of university-equivalent coursework, as well as terminal programs in technical fields, are offered in Florida’s extensive network of community colleges, which are maintained in addition to the state’s university system. Despite the fact that some of these schools provide bachelor’s degrees in certain subjects, the majority of them collaborate with bigger four-year universities to offer a baccalaureate in a variety of disciplines. Other institutions of higher learning, from tiny, highly specialized schools to significant universities like the University of Miami, are supported by private sources.

Florida’s largest cities and their population

Jacksonville, is Florida’s largest city, with a population of 975,177 people. Nocatee has increased 15.98% in the last ten years, making it Florida’s fastest-growing city.

Numerous well-known persons, including athletes, entertainers, and business owners, were born in Florida. These are a few of Florida’s well-known names.

Ariana Grande: Ariana Grande is a singer and actress from the United States. She is most well-known for her parts in the Nickelodeon television shows Sam & Cat and Victorious.

Grande started her career as a child performer on the Broadway stage. She was born in Boca Raton, Florida. With her later appearances on Victorious and Sam & Cat, she gained prominence. Grande is a popular singer who has put out a number of great songs, including “Problem” and “Break Free.”

Walt Disney: American businessman, animator, and movie producer Walt Disney. He is most recognized for founding the Walt Disney Company, but he is also credited with creating some of the most well-known cartoon characters, including Goofy, Donald Duck, and Mickey Mouse.

Although Walt Disney was raised in Chicago, Illinois, he relocated to Florida in the 1930s to start his first animation company. Later on, he constructed Orlando, Florida’s Walt Disney World Resort.

Vince Carter:  Vince Carter is a basketball player from the United States. His tenure with the Toronto Raptors, when he earned the NBA Rookie of the Year Award, is what made him most famous.

Carter attended the University of North Carolina and played collegiate basketball. He was born in Daytona Beach, Florida. He spent eight seasons playing with the Raptors after being selected by them in the 1998 NBA Draft.

Florida welcomes guests with extraordinarily warm and bright weather thanks to its more than 200 days of sunlight each year. Florida seasons are often temperate and warm, despite the sweltering, muggy summers. Most likely, residents in the Sunshine State’s southern region will never require more than a sweater in the winter.

What is the best place to live in Florida?

No matter if you’re relocating the entire family, checking out a new scene for young professionals, or searching for your ideal retirement location, we’ll help you pick out the top areas to live in Florida.

The map displays the boundaries of the United States state of Florida, as well as the location of the state capital, Tallahassee, major cities and inhabited areas, lakes and rivers, interstate highways, major highways, railways, and major airports. 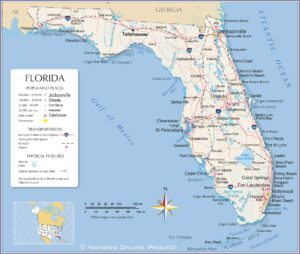 Is this article useful to you? If you require further information, please bookmark us so that you may be alerted of any developments.