Utah, United states! Utah has a thriving employment market, and its citizens enjoy a good standard of living. Salt Lake City and Provo, Utah are both frequently included in rankings of locations with the best employment markets. Do you want to if living in Utah is affordable? Are you searching for the major cities in Utah and their population estimates? If you want to know the language spoken there, then this post is for you.

Mining, tourism, banking, agriculture, petroleum, and other industries are all part of Utah’s economy. This contributes to the state’s thriving job economy. The diversity of jobs in the state will be advantageous if you’re relocating to Utah and are unsure of which industry is best for you.

Many new inhabitants are drawn to Utah because of its beauty, economics, and quality of life. If you wish to join the influx of people migrating to Utah USA, we’re sure you’ll find enough to like. So you will get to know the major cities and their population estimate, the list of cities and towns in Utah, how much McDonald’s pay per hour in Utah, and a whole lot more in this article. 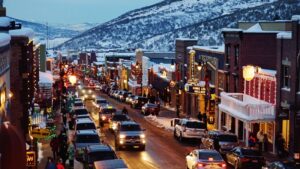 What is Utah well-known for?

The state is well-known for its skiing, with the mountains surrounding Salt Lake City receiving an average of 500 inches of snow each year, as well as the Sundance Film Festival, which takes place in Park City each January and is one of the world’s best independent film festivals.

Utah’s major cities and population estimates are shown below.

What language is spoken in Utah?

With 88% of the population speaking just English, English is the major language spoken in Utah. Spanish, like most other US states, is extensively spoken, with German and Navajo among the other languages spoken.

Utah USA! Utah is a state in the United States of America. The majority of its terrain is made up of mountains, high plateaus, and deserts. Salt Lake City, the state’s capital, is located in the state’s north-central area. Idaho to the north, Wyoming to the northeast, Colorado to the east, Arizona to the south, and Nevada to the west of the state’s borders.

Utah joins Colorado, New Mexico, and Arizona at right angles at Four Corners in the southeast, the only such meeting of states in the US. On January 4, 1896, Utah became the 45th state to join the Union.

The list of cities in Utah is given below

Education accounts for more than half of Utah’s tax-derived government spending. All children between the ages of 6 and 18 are required to attend school. School districts impose taxes to cover over half of the educational costs, with the rest covered by the state.

The state Board of Education is in charge of general public school rules, while elected local boards have more detailed responsibility. There is an increase in the number of private elementary and secondary schools.

The University of Utah, located in Salt Lake City, is the state’s largest university. It was established in 1850 as the University of Deseret and is known for its excellent graduate and professional schools of medicine, law, and pharmacy. Utah State University, founded as a land-grant institution in 1888, has attained national prominence in agriculture, forestry, education, engineering science, upper-atmosphere research, and the fine arts.

Weber State University (1889) in Ogden and Southern Utah University (1897) in Cedar City are both quickly developing institutions with rapidly expanding programs and facilities. Utah’s university system has been a pioneer in online learning, giving educational options to remote citizens.

Is living in Utah affordable?

Utah is ranked 34th in the United States News & World Report’s Affordability Rankings, making it one of the most expensive states to live in. The rankings compare the average cost of living to the amount of money that most households in that state have.

How much does McDonald’s pay per hour in Utah?

Is Utah a safe place to live?

The state is well-known for its great quality of life, low crime rate, and stunning scenery. Utah is less expensive than neighboring Colorado, yet it has a comparable climate and access to beautiful mountains.

The comprehensive map displays the outlines of the US state of Utah, as well as the location of the state capital Salt Lake City, major cities and populous areas, lakes and rivers, interstate highways, major highways, and railroads. 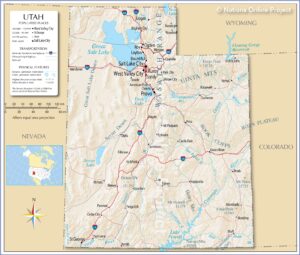 Utah is a state of mind, not only a state in the western United States. Utah’s terrain, sculpted by wind, water, and time, is the ideal canvas for explorers. Utah is a destination where unexpected events make enduring memories, from its five amazing national parks to the winter sports wonderland of the Wasatch Mountains to the urban attractions of Salt Lake City.

We trust that you have found this post informative, please share it with your friends, and don’t forget to bookmark our site for the most latest updates.