Missouri (Mo) United states! Missouri is a state in the United States Midwestern area. It is surrounded by eight states, including Iowa to the north, Illinois, Kentucky, and Tennessee to the east, Arkansas to the south, and Oklahoma, Kansas, and Nebraska to the west.

The predicted population of Missouri in 2022 is 6.2 million, making it the 18th most populated state in the union. It is the 21st biggest state in the United States, with an area of 69,715 square miles (180,560 square kilometers). Missouri’s state capital is Jefferson City, while the state’s other major cities include Kansas City, St. Louis, and Columbia.

Here, you can find information about the best place to live in Missouri, the list of Missouri’s top cities, the state’s largest employer, the Missouri industries with the highest employment rates, the Missouri state map, and much more. 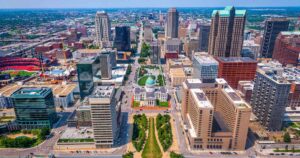 Is Missouri a nice place to live?

Missouri is a wonderful area to live with something for everyone. Cities, rural areas, culture, nature, sports, delicious cuisine, and much much more are all available. Obviously, no one could live here and keep the balance of serenity, mayhem, and adventure. However, visiting is another story.

Is it costly to live in Missouri?

For the second quarter of 2022, Missouri has the seventh lowest cost of living in the United States. The most costly places to live in general were Hawaii, Alaska, the Northeast, and the West Coast. The Midwest and Southern states were the least costly.

Why does Missouri cost so little?

Because Missouri’s median house value is almost 30% lower than the national average. This makes Missouri housing one of the most affordable in the country. Because it is consistently ranked among the top ten most cheap.

The following are the top cities of Mo USA

How many cities does Missouri have in total?

The state of Missouri has 933 towns and cities in total.

What state is Missouri in the United States?

Missouri is a state in the United States of America. Iowa is to the north; Illinois, Kentucky, and Tennessee are to the east across the Mississippi River; Arkansas is to the south; and Oklahoma, Kansas, and Nebraska are to the west.

Is there snow in Missouri?

Winters in Missouri may bring deadly snow and ice storms, which can cause hazardous driving conditions, power outages, and other threats to life and safety. Long durations of subfreezing temperatures might also be dangerous.

Map of Missouri displaying the state’s capital, its borders, its major cities, its villages, its rivers, and its train system. 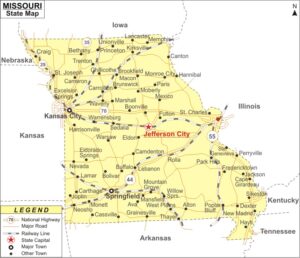 What Missouri town has the lowest population?

With a population of just three, Baker is the smallest town in Missouri. In Stoddard County, along the Castor River, is Baker. The little village is 0.21 square miles in size overall. According to City Data, the 2010 Census revealed that Baker had three residents, two men, and one woman, with a median age of 60.

What is Missouri’s largest employer?

According to the survey, Walmart employs more than 41,000 people in Missouri, making it the state’s top employer. With 1.5 million American employees, Walmart is also the biggest employer in the country.

Which three Missouri industries employ the most people?

The Show-Me State is rich in amenities, and the following communities are among the greatest places in Missouri to live, work, and relax.

1. Columbia: Columbia, sometimes known as “CoMo,” is home to the University of Missouri, as well as Columbia College and Stephens College, all of which contribute significantly to the city’s college town. vibe.

3. Springfield: Springfield is known as the “Queen City of the Ozarks,” and major universities include Drury, Evangel, and Missouri State. There are over 25 identified communities in the city, and the economy is built on education, healthcare, manufacturing, retail, and tourism. Springfield has six hospitals as well as 92 parks and the Springfield-Branson National Airport.

4. Wildwood: The St. Louis Community College-Wildwood campus is located in the suburb of Wildwood, which has only been incorporated since 1995. Residents have access to several recreation trails and parks, as well as Wildwood Town Center, an outdoor shopping mall. The Wildwood Farmers Market is a famous summertime destination.

5. Creve Coeur: Located between Interstate 270 and U.S. Route 40, Creve Coeur has seven public parks and Creve Coeur Lake. Nearly 70% of inhabitants have a college degree, and Missouri Baptist University is the educational leader. Mercy Hospital, with 6,200 employees, is the community’s top employer.

What is the primary industry in St Louis, MO?

What is the state’s primary revenue source?

Please Don’t Hesitate to share this information with your Friends on Facebook, twitter, Whatsapp, and Google Plus if you found it useful do well to bookmark our website to get notified of the latest updates.